My wife and I had some spare adult time again and couldn't help but return to Maui. We headed straight to Lahaina and ended up spending the whole day there. Aside from hunting for poke and hanging out at Maui Brewing. I found myself back on the shores of Lahaina soaking me feet where the fresh water of Kaua'ula meet the ocean.
I actually wanted to see the archaeological work currently being done at Moku'ula. They are digging pits to locate the supporting walls of Moku Hinia fishpond and the island that it surrounded, Moku'ula. Sadly I arrived when there was no work being done and that entire area that is preserved as Moku'ula is now surrounded by a gate. Most likely to keep the digs undisturbed and so that no one wonders in and falls into a hole. 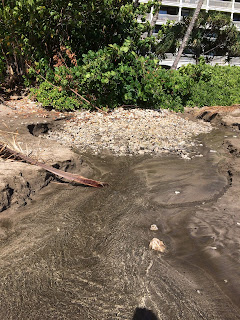 The good thing is that I was able to see Mr Ke'eaumoku Kapu again! This time he was with his extended family and friends at Aikane O Maui next to Moku'ula.  I hung out for a few hours since he invited us to attend his weekly class on Thursday night. It was pretty awesome and reminded me of the class I try to attend weekly back on Oahu with Kumu Kaipo'i.
My wife was with me and she was a little nervous since she's never been to a meeting like this before. Especially when we had to do our own introduction in this way:

On this night Mr Kapu was focusing on the importance of keeping the knowledge of Lahaina alive. Everyone there had a connection with Lahaina and he wanted everyone to be the next generation to share the truths about this important district. He shared a PowerPoint presentation with the ancient names of the areas within Lahaina.

Mr. Kapu  says Lele O Leina was the old name for "Lahaina" as a leaping place. Similar to those found on other islands where the souls of the dead drift off to their aumakua or wonder into eternity. On Oahu we have Kaena Point and Leinono or Leilono at Red Hill, Moanalua. Even Aotearoa has a Cape Reinga, being on the opposite side of Hawaii's leaping places. Instead on the northern most point of New Zealand. As if they traveled vise versa in the afterlife...

Mauna Kawahine- Triangle of pacific direct west
Mo'o bosom fell and formed Rapa Nui
One moai on knees facing Hawaii.
This was another link that Mr. Kapu related to us with Polynesia.

Moku'ula- alter antenna of lizard
I hear antenna being used a lot in Kaipo'i's class as well. It is as if prayer at heiau could turn them on like an antenna. An action only a the highest of ali'i could perform. Unless another was guided by the gods to do likewise.

Puu kahili-hill of the standard.
I was excited to finally know exactly where Kahili was. This was the ancient fortress of Lahaina during war.

Moku hinia- fat fishpond
Mr. kapu mentioned that as compared to other island with rock wall fishponds that protrude into the ocean from the shore. Maui used inland fishponds.
Manawai,puuolilioe,piilani 3 auwai 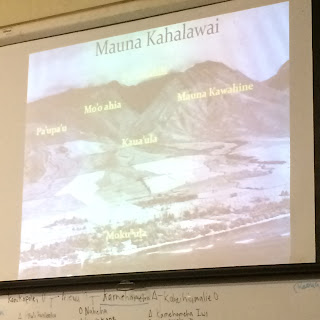 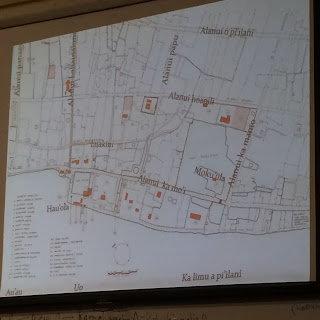 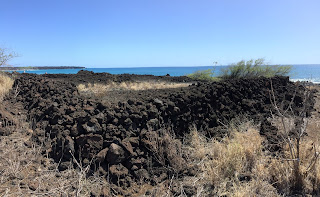 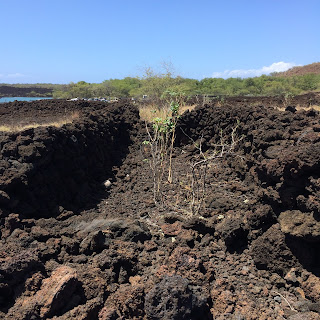 This district has evidence of the last volcanic activity on Maui. 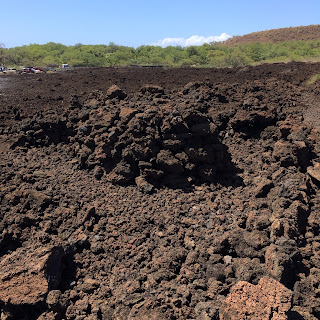 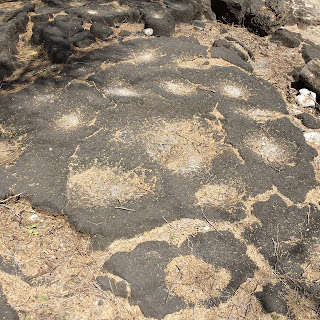 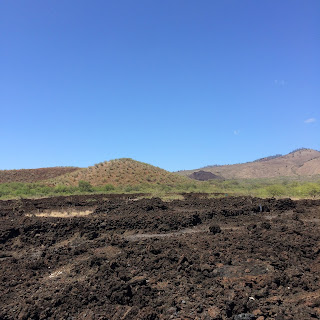 The next day we headed up to the Kula way to pick strawberries and taste goat cheese. After having lunch at Ulupalakua Ranch, we finally headed to Hana via "the back way". I have to admit that I had some anxiety leading up to this drive and was fearing for the worse. The normal Hana Hwy. route is already a challenge for most (most passengers that ride with me, my wife more than likely).

I gained an attraction to this route because of a speech I heard on Bishop Museum's YouTube account from Pat Kirch. That in turn got me to read his book, "Kuaaina Kahiko: Life and Land in Ancient Kahikinui, Maui." All of this came about while delving back into Mo'ikeha and La'amaikahiki research from my last few blog entries.
You see La'a did come to Hawaii and when he left. He is said to have came by the way of Maui and Kaho'olawe. Possibly establishing signs of navigation back to Kahiki. Such as a Pānānā, sighting wall facing the ocean with a notch in it. This notch lines up with a pokahu near the shore and that in turn lines up with the southern cross in the night sky. As a guide to follow south by sea to the homeland of La'a. 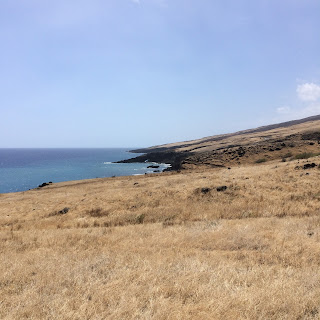 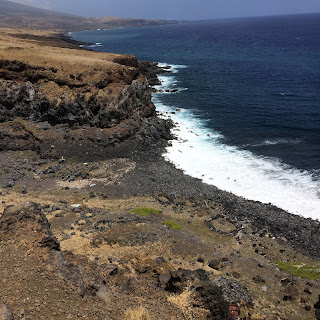 Another phrase that Pat Kirch mentions is an old proverb by Pukui,"when the wili wili blooms the sharks bite." Kirch relates this to the collecting of the ho'okupu offering being ready to give to the chiefs during the makahiki. Otherwise there would be severe punishment to the people of the entire ahupua'a . In Kahikinui the taxed offering to the chiefs would have been uala, sweet potato. Which was very wisely farmed in such a dry arid land during ancient times.
The Wiliwili has a connection to Pacific travel because it is one of the only deciduous plants in Hawaii. As it will drop their leaves just before winter. A strange connection with La'a is that at Hawea Heiau in east Oahu. There actually was an old wiliwili tree similar to the size of these. La'a is said to have brought the drum Hawea from Kahiki which eventually was kept at Hawea Heiau... 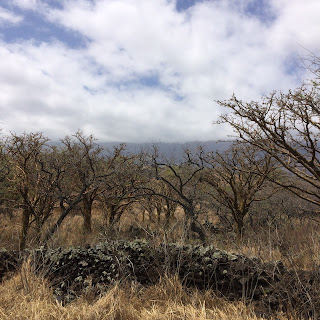 Sadly I could not find the opportunity to stop and search around in Kahikinui because of the narrow roads. By the time I pulled over to look at the scenery we were already nearing Kaupo. I stopped at a little lunch truck selling coffee and snacks. I asked the two local women if they knew any mo'olelo of Kahikinui and they suggested that I contact Hawaiian Homelands for permission to visit some of the wahi pana there. One of them knew of Kirch's book and the pānānā wall. 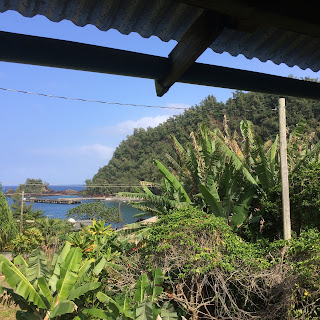 Finally we got to Hana in the afternoon with time to visit the Hasagawa Store for drinks and food to cook for dinner, during our one night stay at a cabin right next to the bay!
I woke up early with the first rays of light and told my wife I has going to hike to the top of Ka'uiki Hill, and left her in bed since I wasn't sure what to expect out of the hike. The lovely lady we were staying with grew up in Hana, and told me exactly how to get to the top, and how in the old days one of the fishermen would hold out a flag to let the town know the fish where in the bay, like a school akule. She also mentioned that during the war there was a lookout stationed on top of the hill and he had a very large dog that could be seen from her house.
When I eventually got up to the top of the hill I was a little let down because there were absolutely no signs that pointed out to me that reflected its ancient and glorious past. Some pohaku were used in creating the marker for the military and I was left to wonder what they could have originated as.... 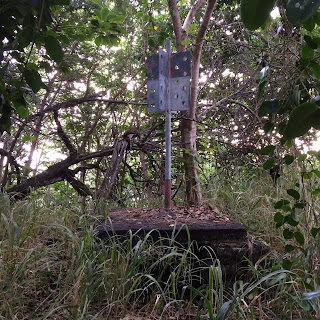 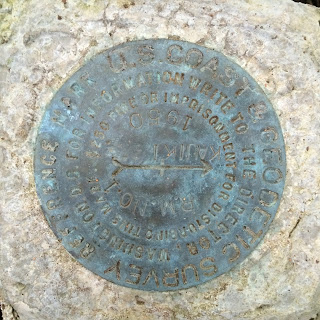 There was a little pit in the ground next to the marker. It would have been the absolute center of the the hill up top and again I wondered what it was for. 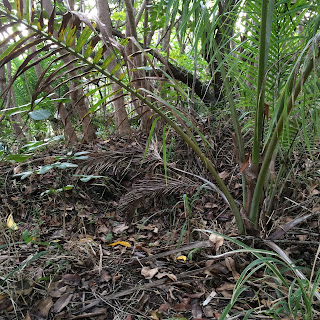 There was an opening in the trees that overlooked the town. So I called my wife on the phone and asked if she could see me waving on the hill. She must have been half awake still and it didn't work out like the old lady's story of seeing a dog up here. 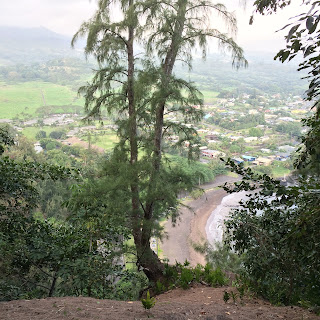 Take a look at my other post for stories of this beloved hill. 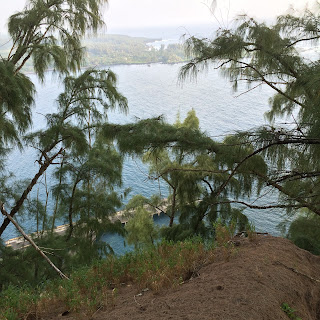 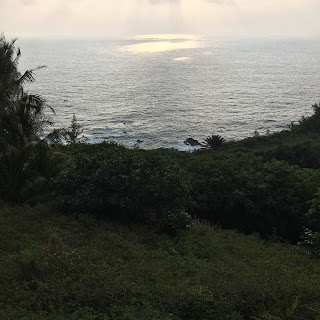 Imagine occupying this hill back in the old days and seeing the ocean full of an apposing fleet of canoe coming to take everything from you... 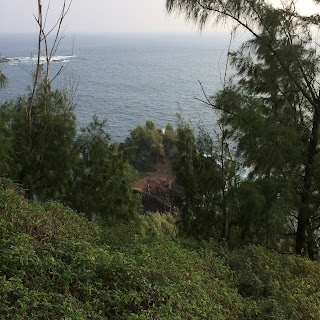 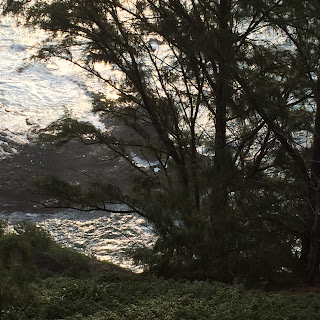 Before I made my way down Ka'uiki. I took the time to do the protocols of visiting a sacred place. I entered and left with only positive intentions in my mind, sat down on an outcrop overlooking  Kaihalulu Bay, and uttered oli that I had learned from Kaipo'i.
I also spoke a new oli that I learned during Mr. Kapu's class. 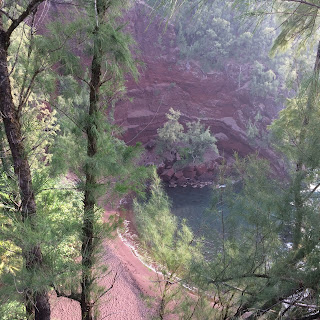 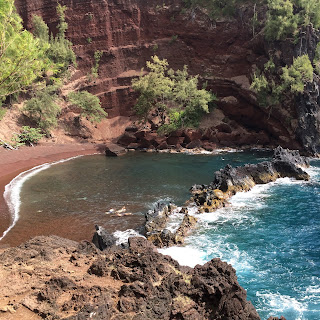 After our long drive from Hana back toward Kahalu'u. We took a stop over at Native Intelligence and then I decided to end our Maui trip with a dip in Iao stream like always.. 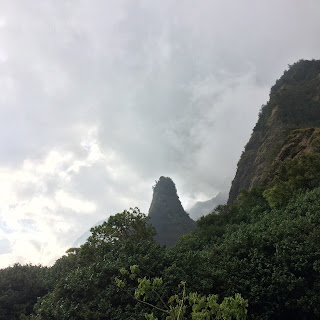 Posted by pohukainacave at 1:28 PM